1. From Train: Making rounds last longer via turning on respawn or other means
Result: No turning on respawn. Buff cloning?
2. From Flux: (No one will expect this one) Removing inactive GA
Inactive admin: Obtain 10 connections a month or you're stripped of your GA.
You get the inactive admin role in discord. Basically a role that lets you read adminbus.
If you want GA back get in touch with a GM+ and they'll trial you over a couple (2 minimum, 5 maximum) rounds and they'll give you your GA back.
3. From Carbon: Making staff roles handling a smaller amount of responsibilities, particularly headmins. Argues that headmins have too many duties and if one is inactive it fucks everything up.
People weren't fond of the idea. Needed carbon to explain but wasn't present.
4. From Vivadel/Yoyo: Turning off Mirror Bot
We didn't kill it (yet.....)
5. From Toof: Higher standards for making announcements
No.
6. From Yoyo: Antag Rep
Turned off.
7. From Vivadel: New system to ban users from the forums. They are banned from posting in all threads, however that are able to make and post in an appeal thread. Still have access to read the rest of the forums, just not allowed to post
Yes.

*8 - 15 from KBB*
8. Let me rewrite the rules good god
Yes. To change them within the next few days.
9. What kind of an artstyle do you think Hippiestation should strive to have?
Memey Rustbucket
10. After economy, what should be our priority; Security, Gamemodes or Dwarves?
Sec -> Dwarves -> Gamemodes
11. Hurry the fuck up and get a god damn consistent AI lawset, Asimov and all these other ones SUCK. If you don't then I'll just PR one and flip you all the bird.
KBB is going to write a lawset.
12. Mandatory playing of Fallout: New Vegas if you want to become an admin on Hippiestation.
Mandatory if you want to be a respected admin
13. Raising the standards on admins. No more weebs or furfags in the admin team, after Zyzarda and Nex they clearly cause too much trouble and give us a bad image. Be harsher on trial fuckups and kick people out.
Yes.
14. Remove Neon Hair Colors
Passed. Remove them.
15. Make heads only be able to be males
Also passed. 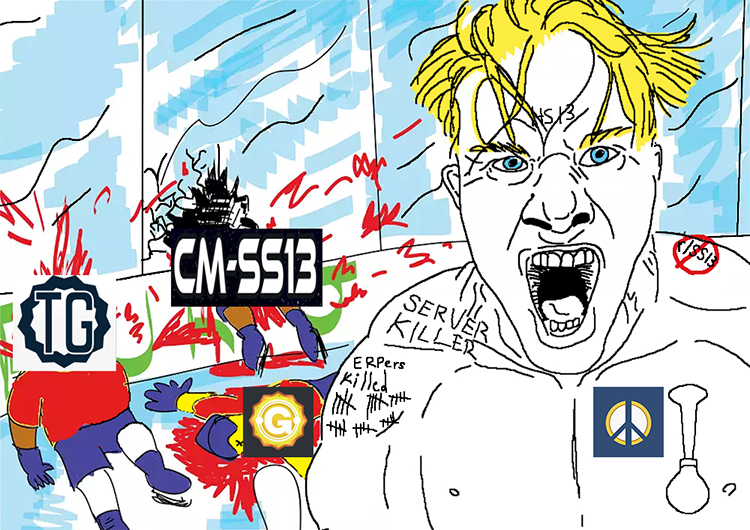